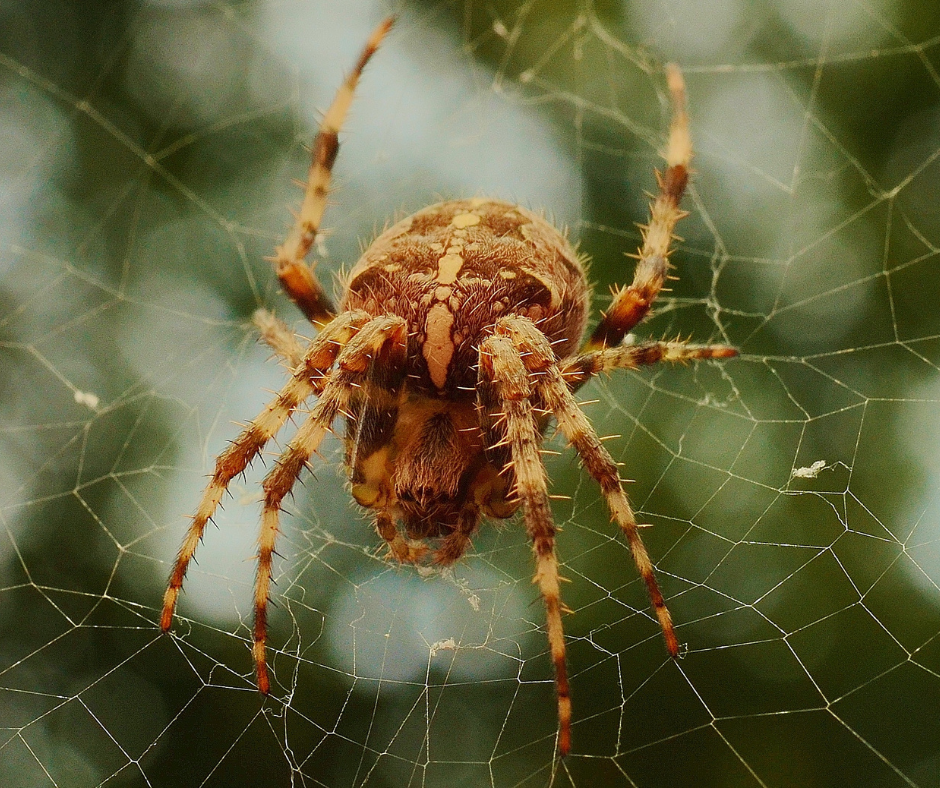 Spiders are eight-legged arthropods or invertebrates with an exoskeleton. Spiders have an abdomen and cephalothorax, eyes, mouth and legs. Spiders have three or four sets of eyes and their bodies range in size and color. Spiders feed on other insects and prey and will catch them in their web and then inject them with their venom causing them to die. The webs that spiders spin are made from a substance called silk that is the strongest known natural fiber. In Virginia, it is believed that there are over 57 different species of spiders, but the four most common spider species in Virginia are the Black Widow, Brown Recluse, American House, and Wolf spiders. While most spiders are not dangerous and pose little to no threat to people, some can potentially cause danger to people.

Two of the spiders are nuisance spiders and two are dangerous because they are venomous. The two dangerous spiders are the Black Widow and the Brown Recluse spiders. Black Widows are one-half inch-long spiders with shiny black backs with a red hourglass shape on the underside of their abdomen. Their venom can be fatal but there was an effective anti-venom formulated in 1956 that can save people who are bit by the spiders. Black Widows are the only venomous spiders that are native to Virginia. Brown Recluses, also known as “violin spiders” due to a marking resembling a violin on the cephalothorax, are also dangerous and can cause significant cutaneous injury with tissue loss if left untreated. They are 1/4 of an inch to 3/4 of an inch and have six eyes arranged in pairs.

The nuisance spiders are the American House spider and the Wolf spiders. American House Spiders are the species of spiders that are most commonly found inside homes. They are 5/16 of an inch to 3/16 of an inch and are usually yellowish-brown with dark markings. Wolf Spiders are the largest spiders in Virginia and are one-half to one-inch in length and are gray or brown with a Union Jack pattern on their back. Wolf Spiders move quickly and strike fear in people who have arachnophobia or the fear of spiders, despite them being non-venomous. Typically, large spiders are less dangerous than small spiders. If you happen to find a spider in your home, it is most likely either a House or Jumping spider. Spiders are considered a form of natural pest control because they will get rid of other pest infestations in your home such as mosquitoes and ants.

Signs of a spider infestation

Some signs you have a spider infestation are that you see spider webs, spider eggs or see spiders themselves. Sometimes it's not that obvious that there is a spider infestation on your property because spiders typically live in gardens, rock piles, shrubs and under debris. When spiders enter your home, they tend to go to places that resemble their natural habitats. They will hide in garages, sheds, barns, burrow under things and go into dark and secluded areas. Spiders are drawn to homes for two reasons, one because they offer them a shelter and the other is because there are pests that they can feed on. Spiders are also attracted by clogged drains, gutters, bird baths, dense vegetation and tall grasses.

If you have spiders in your home in Fairfax, Alexandria, Arlington or other parts of Northern Virginia, the best thing to do is to hire a professional pest control service to ensure the spiders are removed effectively. Spider removal in Northern Virginia is best completed by a professional pest control technician, because once the spiders are removed, there may still be an underlying pest problem that will continue to draw spiders and other insects or pests back to the property. Spider treatment is done with special sprays and granular insecticide that will get rid of the spiders from your home. Some other methods of removal are glue board and spider repellent that will kill the spiders on contact. In addition there may need to be other general pest control treatments to get rid of other pest populations that may have acted as the source of prey or what brought the spider to the property in the first place.

Why should spiders be removed?

Spiders should be removed from your property because while most are harmless and have fangs too small or too weak to puncture human skin, they will bite when they feel threatened or harmed. In addition to potentially biting, spiders will reproduce in your home and the population will grow and spread and be more difficult to remove. It is important to get them removed at the first sign of seeing them so that there isn’t an opportunity for spread and population growth. There can be hundreds of baby spiders inside an egg sac, so removal of that is crucial. Some believe it is also possible for spiders to spread infections and diseases through their bites. Spiders need to be removed from properties because they are a nuisance and don’t belong in your home.

Once spiders are removed from your property, it is important to maintain your property and make sure they are less likely to return to your house. Some prevention tips are to seal cracks and crevices, make sure window screens are intact. Trimming trees away from the home will also help and remove excess piles of debris. Maintaining the lawn and limiting the water sources will ensure spiders have fewer places to hide. Knocking down webs, removing clutter and reducing moisture and vacuuming will help to keep the spiders at bay. Yellow or sodium light bulbs also help to keep spiders away.

If you have spiders in your Northern Virginia home or are experiencing other pest control problems, contact us today for a free pest estimate. At Summit, we will have a pest control technician evaluate your situation with a thorough inspection of your home and outside property to see if there is a place where the spiders are getting into your home.