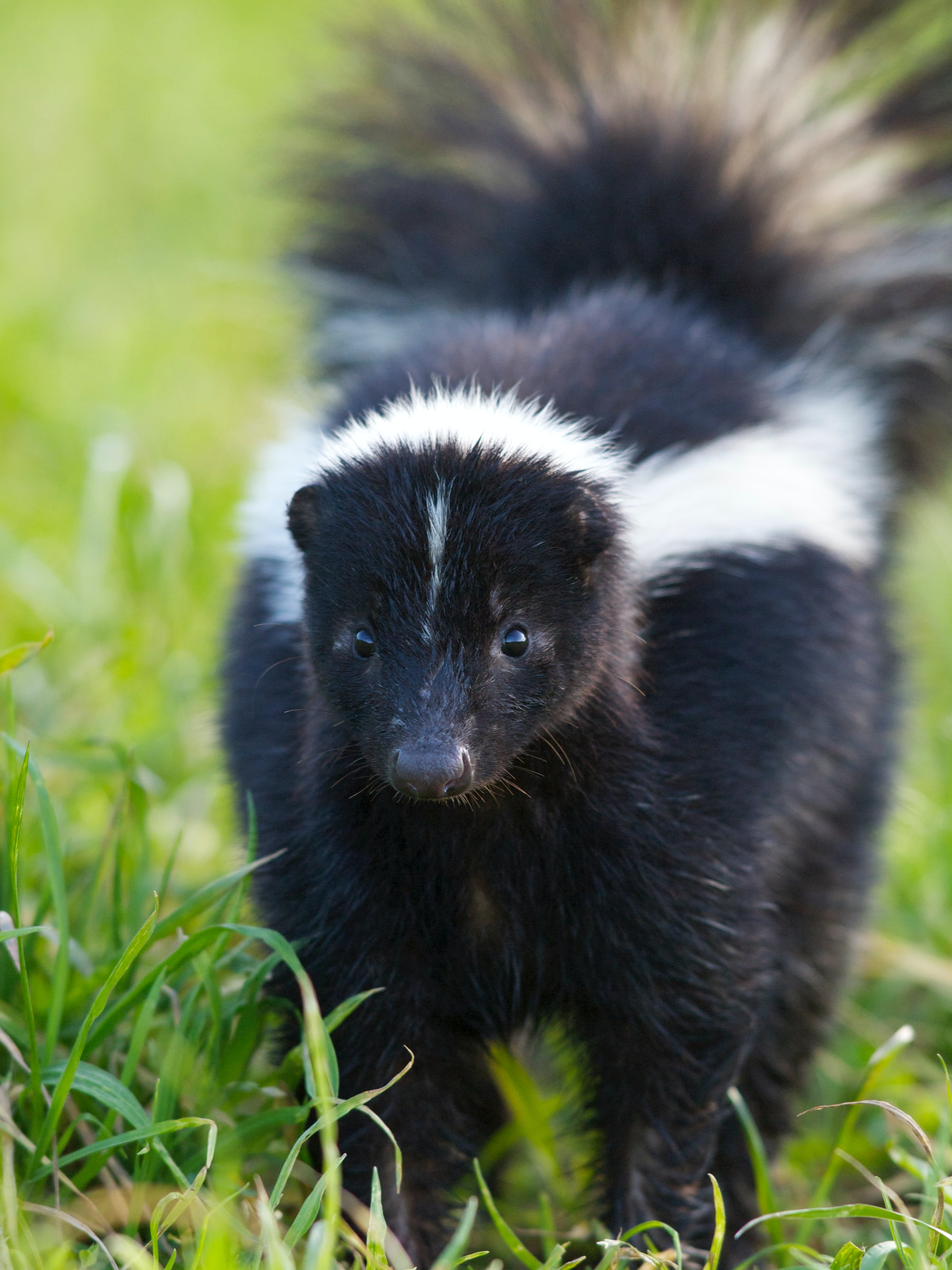 The name skunk comes from the Algonquian Native American word seganku which means polecat. Skunks are small mammals with black and white fur and long bushy tails. Skunks can be brown or black and sometimes white if they are albino. They are typically the size of house cats ranging from eight inches to 19 inches long and weighing in about seven to 14 pounds. They are omnivores, meaning they eat both vegetation and meat. They forage for food in a one to five mile radius and their diets generally include small mammals, eggs, fruits, beetles and other insects. Skunks are nocturnal meaning they sleep during the day and forage for food during the night. They are not true hibernators, while they will sleep for extended periods of time during the winter, they don’t hibernate in the way other mammals do, instead they are less active than usual, but they will occasionally leave their den on a warmer day. Skunks will overeat in the summer and fall months, gaining weight and fat to sustain them during the winter. In the United States, there are 12 different species of skunks, but in Virginia there are only two; the spotted skunk and the striped skunk. The striped skunk is known for having long white stripes from their forehead to their tail that acts as a warning for their predators. Spotted skunks have white spots all over their body.

Skunks generally are sluggish creatures with poor vision. The do however have excellent hearing and scent. In addition to their glands that emit a stinky odor, providing protection for them, their fur also acts as a barrier, preventing them from getting stung when they are eating bees. Male skunks are called bucks and females are called does and their offspring are referred to as kits. Skunks will mate once a year in the winter and deliver a litter of two to 10 kits in the early spring and will be raised solely by their mother. The kits’ eyes will remain closed for the first three weeks and they will nurse for the first two months of their lives. Once the kits are weaned, they are ready to leave their den and after about 10 months to a year, they are ready to produce their own young. Skunks don’t live long at all, typically only about three years but will live longer in captivity. Some common predators of skunks are dogs, coyotes, bobcats and the great horned owl.

Why do skunks spray?

Skunks are known for their easy-going demeanors, and are not seen as a threat to people. They will only spray when they feel threatened as a defense mechanism to help them ward off predators. They will also communicate through their scent. When skunks spray, the odorous, oily spray has the ability to sting its victims eyes, temporarily blinding them. It is easily determined through the behavior of the skunk whether they are going to spray you or not. Some behavioral signs that a skunk will spray you is if they are charging at you, hissing , stomping its front legs or lifting its tail in your direction. If you suspect you are at risk of being sprayed by a skunk, the best thing to do is move away slowly. Skunks can spray from 10-15 feet away, so sometimes even if you’re far away enough from them, they’ll still be able to reach you. If you happen to get sprayed, there are methods to remove the foul odor from you.

Signs of a skunk on your property

It is more likely that you will smell a skunk than see one, because they are very timid creatures and because they sleep during the day and are active in the evenings, it is more difficult to see them. Another sign is finding small, shallow holes in your yard. Skunks will dig for grubs in the ground to eat and form these holes that look similar to holes that squirrels will dig. Skunks will occasionally cause damage to plants and knock them over. You can know you have a skunk problem if you see their scat or their tracks. Skunks have five distinct toes and it is easy to identify their tracks.

What if I have a skunk in my yard?

If you notice you have a skunk or multiple skunks in your yard, you should contact an animal removal company like ourselves. Animal control will not pick up a skunk unless it’s acting strangely or sick. We will remove skunks from your property using a humane trapping method. Skunks are very receptive to trapping. At Summit, we do five consecutive days of trapping. During the trapping period, there are traps placed on the property near where there is evidence skunks were around. Everyday the traps are checked and re-baited and skunks that are caught will be removed from your property.

What are the dangers of skunks?

Skunks aren’t very dangerous, as mentioned before, they tend to be timid, especially around people and they are for the most part nocturnal. Skunk spray however can be dangerous, especially if it's spray into the eyes of victims. It has a burning effect that will sting and cause eyes to water. Skunks also can be carriers of diseases and their feces have a lot of bacteria in it that can pose harm to other animals and even people. Skunks are the primary carrier of rabies and are also known to carry leptospirosis, tularemia, canine distemper, ticks, fleas, lice and mites and other parasites such as tapeworms, roundworms, lungworms and flukes. While skunks can be dangerous, they are also helpful because they will eat crop-destroying insects.

The best way to make sure skunks don’t linger on your property is to take prevention methods into account. Don’t leave food outside, seal entry points, install exclusion barriers, get professional inspections, treatment and repairs done. Some common skunk deterrents are the use of bright lights or motion sensors, orange or lemon peels in the yard, kitty litter or castor oil or strong-smelling soap or room deodorizer.

For more information about skunks or our skunk removal services in Fairfax, Alexandria, Arlington and other parts of Northern Virginia, contact us today.