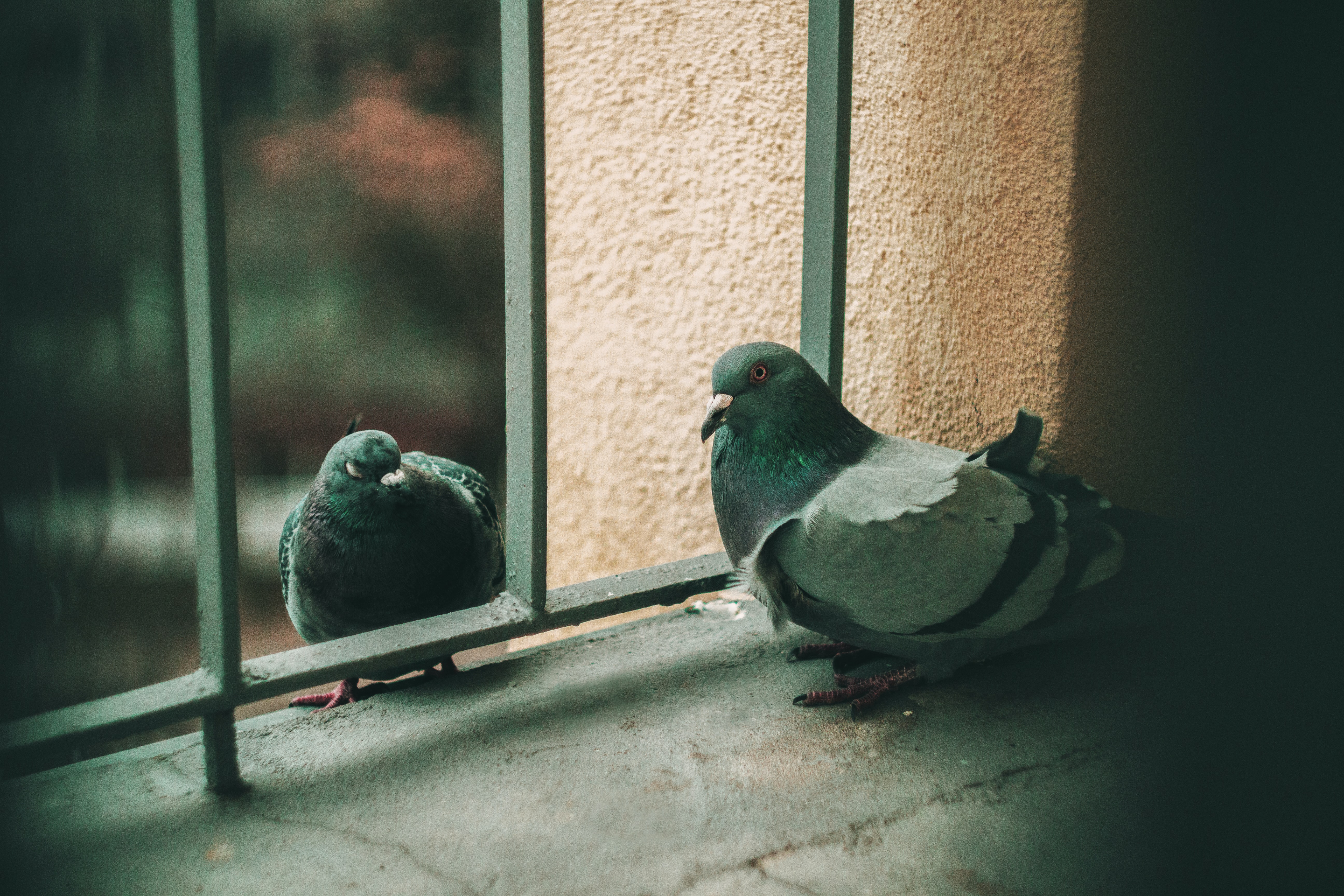 Pigeons are birds that can appear in or near your home, cause destruction and spread harmful diseases. Pigeon control and pigeon removal in Fairfax, and other parts of Northern Virginia is essential. For more information about pigeon removal or other bird removal services in Northern Virginia, read this post and schedule a free estimate with us today.

Pigeons are birds that are members of the columbidae family. Doves are also part of that family of species and there is nothing scientific that differentiates a dove from a pigeon. Genetically speaking, doves and pigeons are the same. The common pigeon is called the rock dove. People often associate pigeons with filth, or dirty cities, however, pigeons are actually some of the cleanest and most intelligent species of birds. They are still wild animals and should be treated well. They live anywhere from three to 15 years depending on certain circumstances and of course their living situation. In captivity, pigeons will typically live longer. Pigeons are known for being fast fliers, traveling speeds of up to 92.5 miles per hour. They can travel upwards of 700 miles in a single day and navigate the airways by sensing the magnetic fields in the earth or following the sun for direction. They are known as the strongest and quickest birds. Pigeons can see in color and can also see ultra-violet lights, which humans are incapable of seeing. In addition to seeing colors, they can also recognize their reflections and differentiate two people. They are also able to differentiate the 26 letters of the alphabet and recognize short words.

Pigeons are capable of flying long distances and remember how to return home after their long flights. Due to their intelligence and ability to travel long distances, pigeons were used to deliver news and messages. Most famously, during the two world wars, pigeons helped deliver important messages. Pigeons worked for air mail delivery and even worked for Reuters, a news corporation, distributing news beginning in the 1850s. In addition to delivering important news and information, pigeons have been used for alternative means, such as for sport and even food. Pigeon racing became a popular sport, as did pigeon shooting. Pigeons were eaten as a source of lean protein but were considered a delicacy. Pigeon excrement also served in an important role. The pigeon excrement was used for fertilizer and also was used to make gunpowder.

Pigeons mate for life and males and females will raise their young together. Females lay two, whitish eggs and can mate all year long as long as they have food available. Once the eggs hatch, the young are reliant on their parents for the first four to six weeks of their life. After six weeks, they become independent and their parents are able to breed again to add to their brood. Baby pigeons are called squeakers or squabs.

Why are pigeons dangerous?

Despite pigeons being smart and resourceful, they are still wild animals and can pose danger to people. Pigeons are known for causing three things; fires, roof damages and diseases. There are diseases associated with pigeons and their excrement. The diseases are histoplasmosis, cryptococcosis and psittacosis. They are all fungal diseases that affect human lungs when you breathe air that has harmful fungus particles in the pigeon feces. Diseases aren't the only problems caused by pigeons. They can eat your plants, ruin crops and cause damage to your property. Pigeons loaf on roofs and patios when they are in urban areas. They are used to being around people and will roost virtually anywhere, including your attic, roof or crawl space. Pigeons feces can deteriorate building materials over a span of time and make your property less comfortable to live in. Pigeons can start fires from nesting in dryer vents, which prevents proper air flow.

What is pigeon control in Northern VA?

Pigeons need to be removed or controlled in areas where or near where people live. Because pigeons can be dangerous to the health of people and the health of homes, pigeon populations need to be maintained. At Summit, we offer pigeon abatement, nesting removal, pigeon dropping clean-up, pigeon deterrents (spike strips and netting), disinfecting and sanitizing, insulation replacement and pressure washing. If you have pigeons in your property in Fairfax, Alexandria, Arlington or other parts of Northern Virginia, it is important to address the situation and begin a plan to remove the pigeons and treat the areas they may have infected.

How to keep pigeons away

Birds are difficult to capture and remove, so the best and most effective thing to do is to exclude them. Pigeon exclusion is done primarily by using bird spikes, Physical and visual deterrents, bird netting or “sealing them out.” “Critter guard.” Our custom exclusion material will prevent them from gaining entry into the home. Additionally, roof vent guards and chimney caps can be used to prevent birds from getting stuck inside vents and going into chimneys. Pigeon exclusion is an on-going process in order to prevent the pigeons from returning. Once the pigeons seem to be under control, that is when clean-up services can begin to remove the nesting, disinfect the area, remove the birds poop and clean where the birds were. Once the area is cleaned there can be deterrents placed to make the pigeons not want to return to the area.

Who to call for pigeon removal in Northern VA?

If you have a pigeon problem on your property or even in your home, it is important to call a trusted animal removal company. Summit has been in business for nearly 30 years and has helped countless members of the Northern Virginia community with their pest control, animal removal and home improvement needs. We specialize in the removal of wild animals that may cause problems for you and your family as well as for your home. For a trusted and proven reliable company, book your pigeon removal with us.

For more information about pigeon control and pigeon removal in Fairfax, Alexandria and Arlington, contact us today for a free estimate.