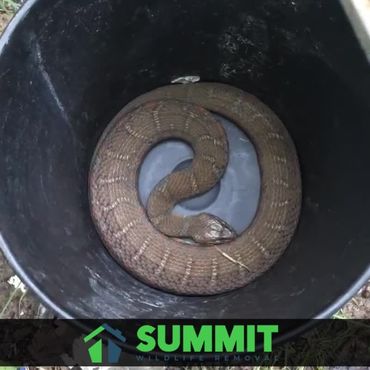 How to identify Northern Water Snakes?

Northern Water Snakes are the most commonly found water snakes in the United States. They can vary in color from tan to gray or brown and the younger snakes tend to be more brightly-colored. They are known for having banding with hourglass shapes and can grow up to four and a half feet in length but typically measure around three and a half feet long. These snakes are found in eastern North America and the Midwest.

These snakes are aquatic and live in streams, lakes and swamps. As an aquatic snake, they are able to stay under water for an extended period of time, for up to one and a half hours without having to come up for air. They can climb trees situated above water and will drop from the tree into the water at times. Northern Water Snakes are interesting because they give birth to live young and their offspring are independent as soon as they are born. They mate in the spring and give birth in the summer. They are social only for the purpose of mating and all other times, they are solitary snakes. When Northern Water Snakes are not in water, you can find them basking in the sun. In the summertime, they are especially prevalent and you might find one basking beside your pool.

Although Northern Water Snakes are non-venomous, they might still bite if they feel threatened. These snakes are known for being aggressive and will bite especially if you try to handle them. Bites from these snakes can be incredibly painful and you should seek medical attention for the snake bite. They are not known for spreading any harmful diseases

Snake fungal disease (SFD) is an infectious and fatal disease that has been affecting various snake populations since 2006. This disease is spread by direct contact and snakes will begin to have discolored skin, followed by lesions that develop crust on them. Occasionally the disease will resolve itself when the snake sheds their skin. There is no treatment for the disease, however the lesions can be removed surgically and antibiotics might help, but this can be difficult considering they are wild snakes.

How to keep snakes away

Do you have a snake issue on your property in Northern Virginia? Snakes can get into your home, attic, crawl space or basement. In addition they can make a home under your deck or porch. Snakes can help control some other pest populations like mice and rats, however if they are interfering with the way you and members of your household live, then it is time to remove them from your property. Snake prevention:

What to do if I find a Northern Water Snake?

People are often very fearful of snakes and will act erratically around them which will oftentimes upset them and make them more prone to attacking or biting. If you happen to find a Northern Water Snake it is important to not attempt to move it or touch it. Although they are non-venomous, they are still very aggressive and will strike and bite. If you have snakes of any kind on your property or in your home and would like them removed, you should contact a professional wildlife removal company like Summit Wildlife Removal. At Summit, we offer wildlife removal services as well as pest control. If you need wildlife removal services such as trapping or exclusion work or some kind of pest control service, we can help you in the Northern Virginia area. Let us get you scheduled for an estimate for snake services, wildlife removal or pest control.

What are some snake services you offer?

We offer snake trapping, snake deterrent programs such as snake scram and snake fences and hand removal. If you have a snake on your property and need to have it removed, we offer something called a snake survey. During a snake survey, one of our technicians will complete a thorough inspection, locate nests, entry points and possible food sources. The goal of the snake survey is to locate the snake and come up with a solution for keeping snakes away long-term. Snake surveys cost $175 and if the technician is able to remove a non-venomous snake such as a Northern Water Snake, it will be an additional $60 and if they remove a venomous snake such as a copperhead is an additional $115. If you only need snake prevention services and do not actively have a snake on your property, you qualify for a free estimate. To get scheduled for snake prevention or a snake survey, contact us today.

If you need pest control services, Summit Pest Control offers free pest estimates for ants, mosquitoes, rodents, stinging insects and others. Having pest control on your property will help to limit other wildlife activity and improve the health of your home. Contact us today at 703-884-2124 or fill out our contact form.