How the winter weather affects wildlife in Northern VA 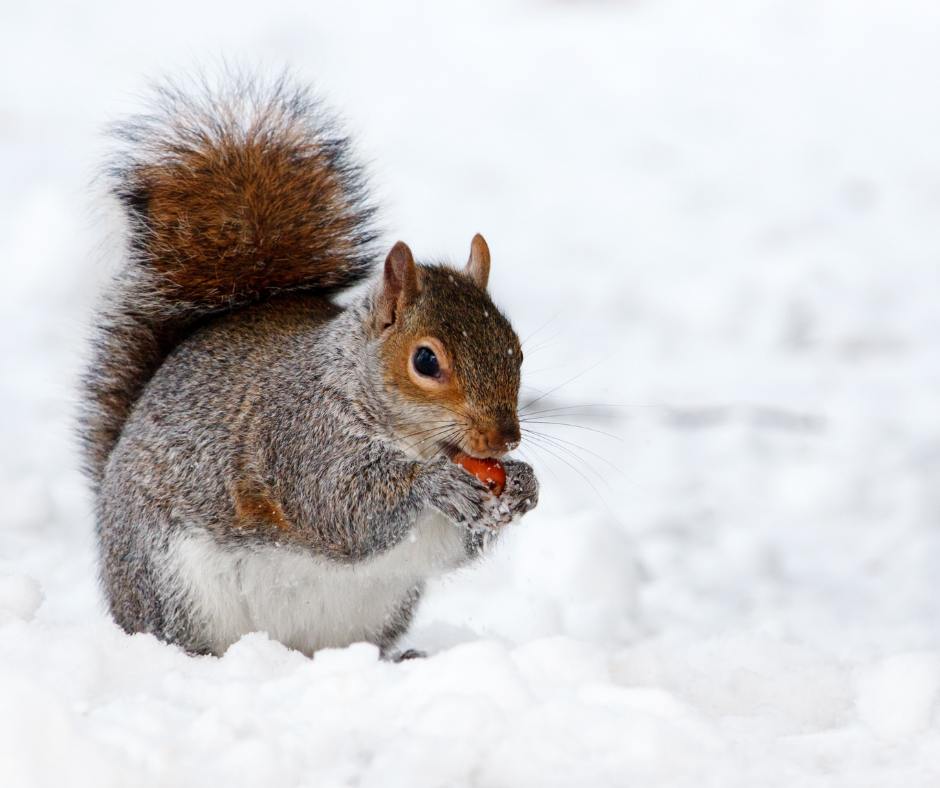 It’s obvious to see we have had quite a harsh winter, with below freezing temperatures and heavy snow. The winter weather has left people without power for days and the roads undrivable. Something that a lot of people aren’t thinking about is how the weather is affecting wildlife and how devastating it has been to some populations.

The snow and the icy weather is making it difficult for some wildlife to find food or appropriate shelter to keep them warm and safe. Some animals will migrate or hibernate in order to survive. Migratory bird species will head south for the winter. Some bird species don’t migrate and there is even a species, the common poorwill, that hibernates during the winter. The species that don’t migrate or hibernate must tough it out and rely on their adaptations for means of survival. Mammals with fur and fat will be able to stay warm but must rely on available food sources which might be hard to come by.

Carnivores will hunt other animals while herbivores and omnivores might struggle a bit more to find vegetation and insects to feed on. Some animals will enter into hyperphagia, which is when they eat as much food and drink as much water as they can in preparation for the winter. One animal that does this is the black bear. In the summer and fall, bears will begin bulking up. Other animals will gather large supplies of food to eat during the winter. Sometimes they will run out of food and will have to forage, which can be difficult when everything is frozen.

Opossums are finding it extremely difficult during this time because unlike some other wildlife, they don’t hibernate and must eat everyday to survive. Opossums are prone to frostbite and hypothermia on their exposed limbs like their feet and tail which aren’t covered by fur. Occasionally, opossums can even lose their tails from the winter weather. The body temperature of raccoons will drop to adapt for hibernation. Skunks, however, are not true hibernators and will wake up from time to time during the winter to forage for food. Raccoons and foxes are other examples of animals that are not true hibernators and will still wake up from time to time to search for food.

Some animals like moles, voles, and groundhogs have made burrows under the ground where they will reside until the end of winter when the ground thaws out. Animals are being forced to find alternative places to seek shelter and in some cases, that might be unconventional or even dangerous. For example, some animals might nest in a chimney or an exhaust vent and that is a fire hazard but also unsafe for them.

Animals that don’t hibernate might enter into a state of torpor, which is a period of decreased activity. Hibernation simply put is extended or prolonged torpor. Animals that don’t experience torpor, keep warm in other ways including, herding and denning with others , growing thicker fur and developing fat reserves. Some adaptations will help protect the animal from their predators, for example some animals will change color in the winter to better blend in with the landscape.

Occasionally, animals will awaken from hibernation on an unusually warm winter day only to be surprised it is cold again the next day. When this happens to an animal, they most likely won’t survive. The animal will not simply be able to go back into hibernation just because they were fooled by the weather.

Birds are known for migrating to other parts of the United States where it is warmer. Some birds however are not migrating species and will stay local. Birds might choose to keep warm in hollowed out trees or even inside vents or your attic space.

During the winter, we as people tend to spend more time inside, days are shorter and as the sun sets, the temperatures begin to drop. Animals too, are seeking warmth and shelter and that shelter might just be inside your home. Rodents and other wildlife will get in through cracks and crevices or might chew on parts of your roof to get into the attic. Some animals might settle into your chimney, crawl space or vents on the home.

Animals in attics, crawl spaces and other parts of the home

Animals will get on roofs and can get into attic spaces where they will hibernate for the winter. Once a squirrel, raccoon, rat, mouse or other animal gets into an attic, they will use insulation to keep warm and build a nest, but they will also tear at it and soil it with their droppings and urine. Animals will get into wherever they can to stay warm and in some cases that is in your living space, walls or crawl space. Mice and rodents might find refuge inside your pantry, feeding on snacks. Squirrels might get into the walls or soffit of your home. Some animals might live in an insulated crawl space and use the insulation to stay warm.

When an animal enters your living space, it can be dangerous because they carry bacteria and parasites and can even transmit harmful viruses and diseases. Additionally, animals can be very unpredictable and when they come face to face with you or other members of your household, they might be aggressive. Aggressive animals might scratch or bite because they are scared or feel threatened.

When weather conditions get too harsh and there is no food or adequate shelter for the animals, they might perish. Animals will do their best to try to survive and adapt to the situation, but sometimes that isn’t enough. When the weather is harsh, we don’t often think about the animals and how life is for them. They don’t have the option to turn on the heater and bundle up in blankets. Some people might wonder why animals put themselves through this instead of just permanently settling in warmer climates. Animals become adjusted to certain areas, they establish themselves in areas where they can find food and shelter. Change is extremely hard for animals, so they choose to endure cold winters, in order to be happy for the rest of the year.