How do birds migrate? 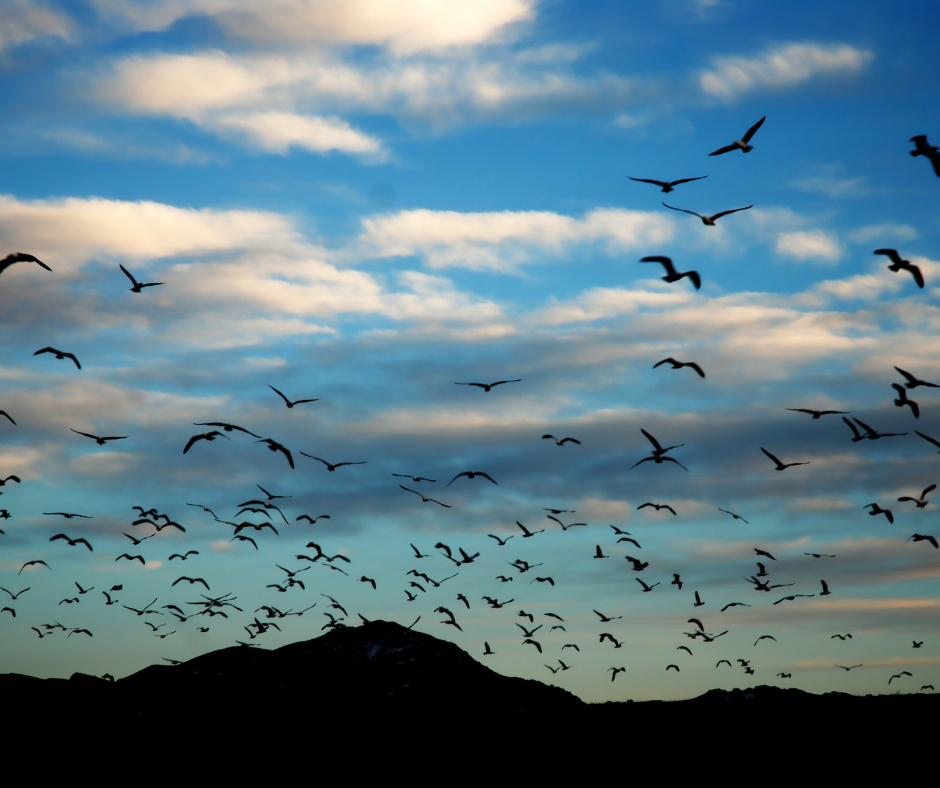 Migration is an integral part of a bird’s life. Migratory bird species fly south for the winter where the weather is warmer and will return to where they are from in the spring. Because bird species don’t hibernate, with the exception of one species, birds adapt to the cold, winter weather by flying south for the winter. Some birds travel several thousand miles roundtrip. Other than trying to escape the cold, migration gives birds better access to food supplies. During the winter in Virginia, trees become barren and lose their fruit, food sources become limited and several species would have a difficult time adjusting and finding food.

There are several bird species that are considered migratory birds, but what exactly does that mean?

What are some examples of migratory birds?

The only species of birds in Virginia that aren’t protected are the European Starling, sparrow and the pigeon. If there are starlings, sparrows or pigeons on your property, they legally can be removed and or their nesting can be removed by a professional wildlife removal service. It is still important to not touch the birds or their nests and to rely on professionals to remove them. Professional companies like Summit will be able to safely and humanely remove birds and their nesting materials. Nesting material contains a lot of bacteria and can also be a fire hazard depending on where it is located, because things that are used for nests are flammable.

How do migratory birds find their way home?

The way by which birds migrate has been studied for many years and recently, researchers have found some intriguing information about their migration patterns and how birds actually know how to migrate and find their way back home after the winter. There is reason to believe that birds migrate by smell, sight and with help from the stars. Some people now believe that birds rely on earth’s magnetic field for their internal compass.

There is a new study from Oxford University written in the journal Science, that suggests birds are able to sense the magnetic field due to the angle of inclination, declination and intensity. The angle of inclination is the angle by which the magnetic field dips into the surface of earth. The angle of declination is the difference between magnetic north and true north. Lastly, intensity refers to the strength of the magnetic field. Birds having a sense of direction is innate and something they inherit from their parents. Birds have internal clocks and compasses that let them know when they should begin to head south and when they should return to their original nesting site. Birds also have sensory cues from the magnetic field that allow them to have a better sense of direction. As the earth rotates it generates electrical currents.

Birds are able to return to the exact same place they left months earlier. Over time, the magnetic field shifts in strength and direction, so it can be difficult for the birds to locate the exact spot they migrated from. There are other factors that are interfering with birds being able to pinpoint their previous nesting locations such as radio towers, electrical equipment and other technologies.

Migration is an adaptation for some bird species and protects them during the winter and ensures their survival. With more and more species becoming threatened, endangered and going extinct over time, it is important to keep birds safe. The Federal Bird Treaty Act protects different species and ensures they are not harmed or killed.

Some bird species however might build nests on your roof or inside a vent and it might be necessary to remove them. Chimney Swifts for instance are a protected migratory species and they might make a nest in your chimney. If that happens, you will have to wait for the chimney swift to migrate before you can have their nesting removed and the area cleaned and disinfected. Additionally it is wise to have a chimney cap installed to prevent future entry of other birds and nuisance animals like raccoons and squirrels.

If you need bird removal for your home in Fredericksburg, Fairfax, Alexandria, Arlington and the surrounding areas, you will need to contact a professional wildlife removal company like Summit Wildlife Removal. Some birds are protected and it is illegal to remove them, their nests or eggs.  Summit offers free inspections and estimates for bird removal and will be able to determine if it is a protected species or not. Summit can provide you with several options to deter birds and to keep them away. Some services for birds include:

Contact Summit Wildlife Removal today to schedule a free estimate for bird removal services. To learn more about the Federal Migratory Bird Treaty Act, take a look at one of our previous blogs linked here.