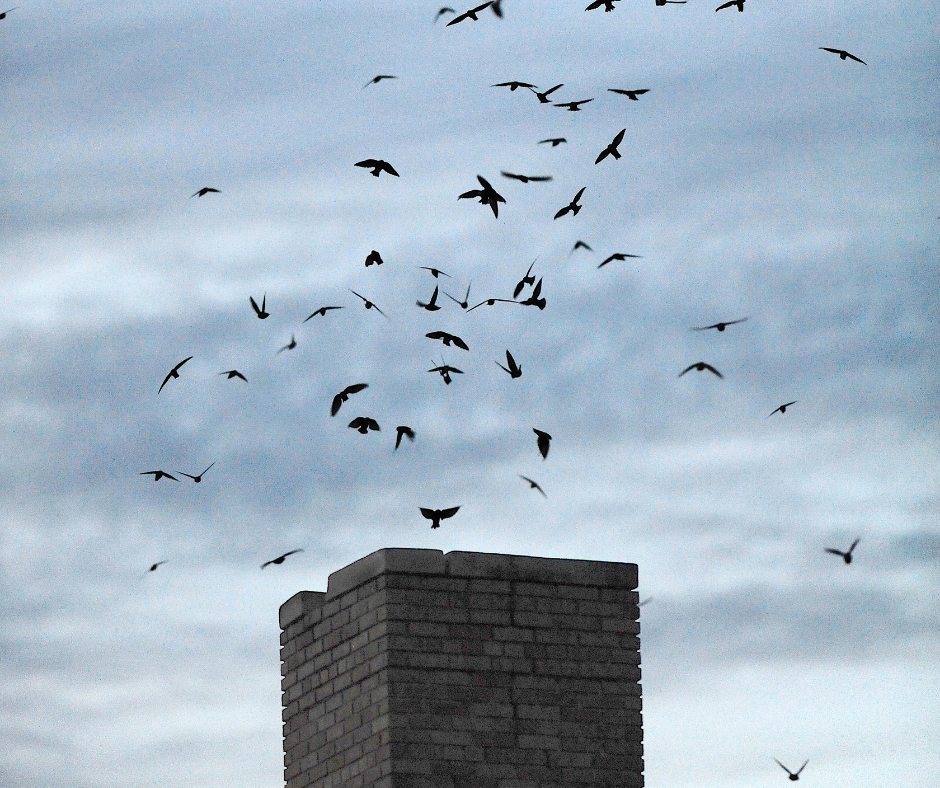 What are chimney swifts?

Chimney swifts are birds known to roost or nest in chimneys. These bird species will also nest in caves and hollowed out trees. Chimney swifts spend most of their life in flight with constant wingbeats, even taking their baths, hunting and sleeping while flying. Over the span of a day, chimney swifts can fly up to 500 miles. Ranging between the size of a sparrow and a robin, swifts are small and have dark gray-brown coloring. The conservation of this species is declining and they are considered vulnerable which falls under the threatened category in the conservation status. Chimney swifts feed off flying insects such as flies, wasps, bees, ants and more. One of the main things they will eat are imported red fire ants which are an invasive species.

Where can chimney swifts be found?

Chimney swifts are found in the eastern part of the United States and Canada and will migrate to South America in the winter. Migration occurs when the breeding season is over in the late fall. In the spring, the chimney swifts will return from South America and build their nests again inside chimneys. These birds use their tacky saliva to adhere their nest to the inside of the chimney. Something interesting about chimney swifts is they are incapable of perching upright like most species and instead cling to vertical surfaces. This species is also very social and will roost or live communally when they are not in breeding season.

How long do chimney swifts live?

Although they are federally protected by the Migratory Bird Treaty Act, they are capable of living for close to five years. The Migratory Bird Treaty Act protects native bird species from being trapped, killed, hunted or their nests and eggs being touched. Due to their conservation status, the population will continue to decline if these guidelines are not being strictly followed. Chimneys can be filled with hundreds or thousands of chimney swifts at a time during non-breeding times when they roost together.

How to prevent chimney swifts

Chimney swifts will leave your chimney on their own after their babies have become independent enough to support themselves. Once the birds are all out of the chimney, you can hire a professional wildlife removal company to remove the nests , disinfect the chimney and install a chimney cap. The best thing to do to prevent chimney caps from roosting in your chimney is to have exclusion work done by a professional and licensed wildlife company.

How do people know there are chimney swifts in the chimney?

Chimney swifts are not as dangerous as some people might think. These birds are not known for spreading viruses or diseases. Chimney swift nests are also not a fire hazard. There is no risk to people or pets from chimney swifts and they can actually be incredibly helpful because they will help to keep insect populations down by feeding on them. They will also eat invasive species which can be harmful to their non-native environment.

What to do if there are chimney swifts in your chimney?

If there are chimney swifts in your chimney, there really is nothing you can do until they leave on their own. Because of their conservation status and because they are federally protected, the chimney swifts cannot be touched or removed and it is illegal for you to attempt to remove them. You can call a wildlife removal company like Summit Wildlife Removal and they will be able to give you a timeline for when the empty nest can be removed and the chimney can be cleaned and covered.

How much does it cost for chimney cleaning and chimney caps?

The cost to remove old nesting material, disinfect the attic and install a chimney cap varies. As licensed wildlife removal professionals, we at Summit Wildlife Removal can send one of our skilled technicians out to complete an inspection and determine what the cost will be. For more information about our wildlife removal services give us a call.

How to protect chimney swifts

There are various ways to help in the conservation efforts of chimney swifts. Without chimneys, the survival rates of the swifts will continue to decline. There are specific chimneys that can house hundreds of chimney swifts and protect them from harsh weather, especially hurricanes which have been known to wipe out large numbers of the population. The main contributor to the population decline is a lack of safe shelter. While it might seem in your best interest to exclude chimney swifts, it might be doing more harm than good. Chimney caps are essential for homes, especially in Virginia, because other nuisance animals like raccoons, squirrels, other bird species and even bats.

The best thing you can do to help conserve them is to avoid touching them, their eggs, their babies or their nests. Wait until they leave on their own. In certain states there are conservation programs in place to inform and educate the public and provide resources and ways to help with the conservation efforts. For more information about how to conserve chimney swifts, check out this link: https://partnersinflight.org/species/14048/. To schedule a chimney inspection with Summit Wildlife Removal, contact us today at 703-884-2124 or through our contact form.